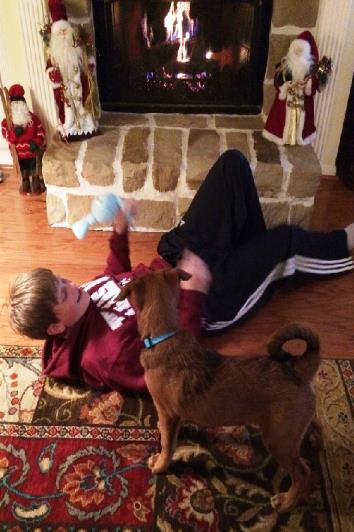 We love Baby Bear and he seems to be adjusting wonderfully.

My boys love to play with him and so do I.

So glad we came by.  He’s a great addition to our family.  Thank you! 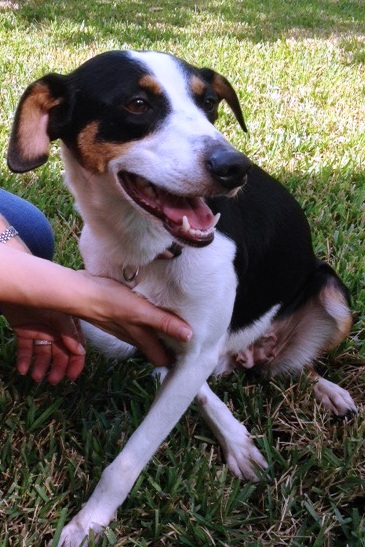 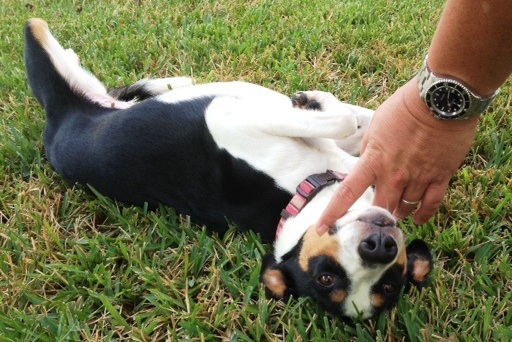 I wanted to send you a little note to let you know that sweet Sally (now Millie) is doing GREAT.   She is coming into her own skin and making progress every day.  She has free range in the house when we are away at work and she has not had any accidents or chewed on anything.
We are amazed at how well behaved she is- she has already learned to always stop at the door to have her feet wiped before coming in and responds to almost everything on our first command.  Although she still doesn’t seem to know what toys are for, she learned to play fetch over the weekend and had a grand time frolicking about in the yard with her ball.   Mainly, she just loves to love!
She is most content just sitting on the couch with her head in one of our laps.  When it is just us at home she is so happy with lots of energy and always wagging her tail.  She is still scared when she meets new people, but we know that will take some time.  We couldn’t be happier to have her in our family and we already love her very much.
We are all so grateful for the friendship and love that you bestowed upon her in her time of need and for bringing us together!  Thank you, thank you, thank you!! 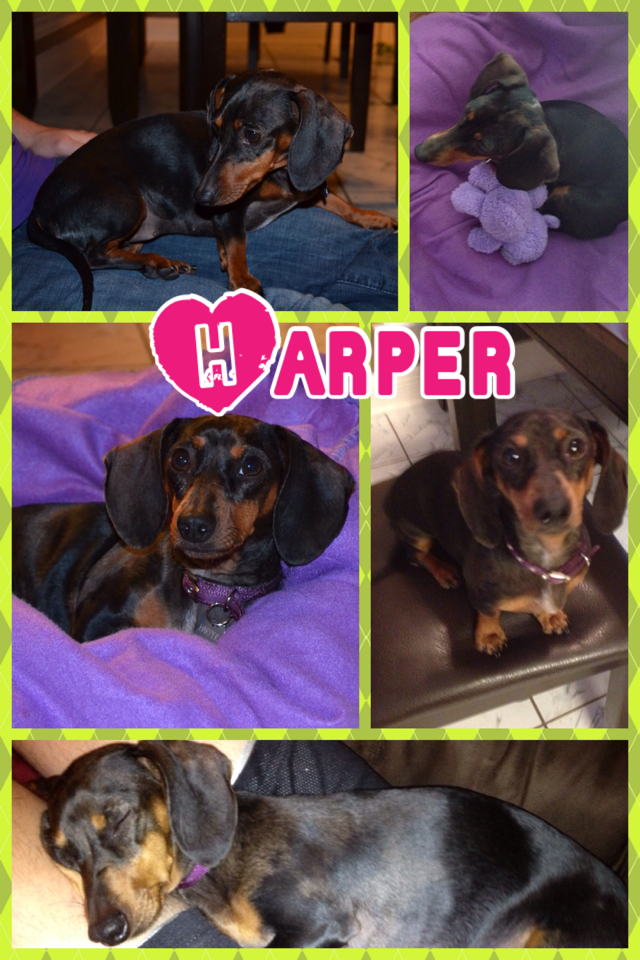 We just wanted to update you on “Gretchen”, or as we have named her, Harper.  We are in love with our new little princess and couldn’t be happier.

The first couple days she was pretty shy and not amused at all by any of the toys we had bought her, but by day three she broke out of her shell and has since grown very fond of her animals, especially her purple cow!  She absolutely loves her walks and she struts down the street like she owns it.  In true Doxie fashion, she always tries to guilt you into more food and treats with those big brown eyes.  It’s hard to say no, but for the most part we stay strong!  We had a little fleece-lined pillowcase bed made especially for her that she loves, along with her tiger print bed and purple blanket.  She’s an LSU fan now too, of course. 🙂

My 5-year old stepson loves Harper, and the feeling is definitely mutual.  She especially loves chasing him around our big backyard and helping us find him during hide and seek games.  Her favorite spot, however, is in your lap.  She wants to be as close to you as possible, and we all enjoy having her there — especially when she is sleeping.  She has the most adorable little snore that just melts your heart.

She went to the vet to get her stitches out yesterday, and everything checked out great.  Losing our last dog was a very tough experience, but Harper has reminded us how wonderful the love of a dog can be.

Thanks K-9 Angels for saving her life.  We promise to love her and continue giving her the best life a dog can dream of!

LOVE is an Essential Nutrient 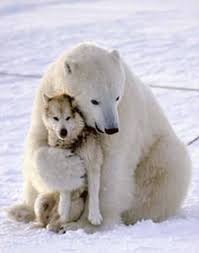 Observation of the interactions in a pride of lions, pack of wolves, the love shared between mother and cub, play between siblings in even the most solitary of feline species, and evidence of complex animal emotions teach us that animals have a far greater capacity to ‘feel’ than many people believe.

This probably comes as no news to you.

Pets are an integral part of our lives because there is an unspoken connection and communication that is very real.  When we remove them from the wild, so to speak, the burden is on us to give them what they would have gotten in the pride or pack.  What we give is returned in kind.  A reciprocal loving relationship with a pet can form an unparalleled bond.

While these thoughts probably only reinforce what comes naturally to a loving pet owner, it is easy to forget the social and psychological needs of a pet since they can seem pretty much self content so long as a bowl of food is in front of them.

But don’t forget their full range of needs, for your sake and theirs.  Be sure to provide regular love, play, and other interactive stimulation to enrich both of your lives.

Video: Baby squirrel climbs the wall
Don’t be misled by the simple title, this is one of the most remarkable videos thus far! A must see…

Thought for the day: “Nothing living should ever be treated with contempt. Whatever it is that lives, a man, a tree, or a bird, should be touched gently, because the time is short. Civilization is another word for respect for life.” Elizabeth Goudge

Tagged as pet needs, social and psychological needs of a pet

At a press conference this morning, my colleagues and I released the results of the latest HSUS undercover investigation – in this case, laboratory experiments on dogs and other animals at Georgia Regents University in Augusta, Ga.  The focus of our investigation was on the use of dogs for unnecessary and terminal dental experiments.  The dogs had been gathered and sold to the university by an unscrupulous random source Class B dog dealer.

The hound mixes our investigator saw in the laboratory looked strikingly similar to my dog Lily, and for that reason alone this investigation had special poignancy for me.  The dogs there seemed so vulnerable and afraid, and it is a horrifying thought to imagine Lily in the hands of someone with the worst of intentions for her.

Our HSUS investigator spent three months at GRU taking care of dogs who underwent painful dental surgery.  The dogs were acquired from Kenneth Schroeder – a random source Class B dealer who has been formally charged by the U.S. Department of Agriculture for violations of the Animal Welfare Act, including obtaining multiple dogs from illegal sources.

The HSUS
Shy Guy, who formed a special bond with the investigator,
was one of six dogs subjected to painful dental experiments
during the investigation. He was later euthanized for a
small sample of his jaw bone.

The investigator developed a very special bond with one of the dogs who was malnourished and scared of men.  The investigator named him “Shy Guy.”  Shy Guy and five other dogs had their teeth pulled out and had dental implants put in place.  Shy Guy, who stopped breathing on the surgical table during the removal of his teeth, survived only to be killed eight weeks later, along with the five other dogs.  We are appalled to see that the dogs died for just for a small piece of their jaw bone.  You can see Shy Guy and the other victims in this video, narrated by actor and Georgia native Kim Basinger.

We know that these six dogs were not the first victims of unnecessary dental implant research.  Georgia Regents University has been conducting similar experiments on Class B random source dogs for years.  Between 2005 and 2012, 186 dogs were purchased by GRU, with many of them likely suffering the same fate as Shy Guy.  All 186 dogs were acquired from Kenneth Schroeder.

Documents regarding one of these studies refer to the upcoming expiration of GRU’s patent on a previously-developed dental implant product and states that “competing technologies are being developed,” suggesting that the research was conducted to try to give the company a leg up in the tooth implant world.  A critic of these experiments, Dr. James P. Jensvold, DDS, noted that the products at issue in this lab already had Food and Drug Administration approval.  When he was a dental student and maxillofacial surgery resident, Dr. Jensvold told us that he had “witnessed laboratory animals being treated little different than a test tube, which is inconsistent with the values of compassionate health care.”

Urge the USDA to crack down on Class B dealers »

We have filed complaints with the USDA and the National Institutes of Health’s Office of Laboratory Animal Welfare, calling on the agencies to investigate these issues and others observed during the investigation.  We are calling on Georgia Regents to stop getting dogs from any random-source Class B dealers and to end dental experiments using animals.

There are still six random source Class B dealers operating in the United States.  They are allowed to gather dogs and cats from various sources, including auctions, “free to good home” ads, online sources, flea markets and even from some animal control or other shelter facilities – then they resell them to research facilities.  There have been cases of stolen pets ending up in research laboratories due to these Class B dealers and their lack of morality and ethics.  Shy Guy and the 185 other dogs that GRU acquired could have been pets, just like Lily.

Can you imagine dogs sold by an unscrupulous animal dealer to a laboratory to endure painful procedures, and dying — all for the sake of an unnecessary experiment?   That was the fate of dogs like Shy Guy who were sold to Georgia Regents University by a Class B animal dealer, subjected to cosmetic dentistry experiments, and then killed.

Shy Guy had his teeth removed and replaced with implants.   Then he was killed — just for a small sample of his jaw bone.

Random source Class B dealers who sell animals to research institutions round up dogs and cats from “random sources,” such as auctions, flea markets, and other questionable means — some of them were even family pets.   The notorious Class B dealer with whom Georgia Regents University is doing business has been formally charged by the USDA with a series of legal violations.

Join actress and advocate Kim Basinger in telling the USDA to take strong action against Class B random source dealers and urging Georgia Regents University to not only stop acquiring animals from these dealers with a long history of unlawful activities, but also to end these unnecessary dental experiments. 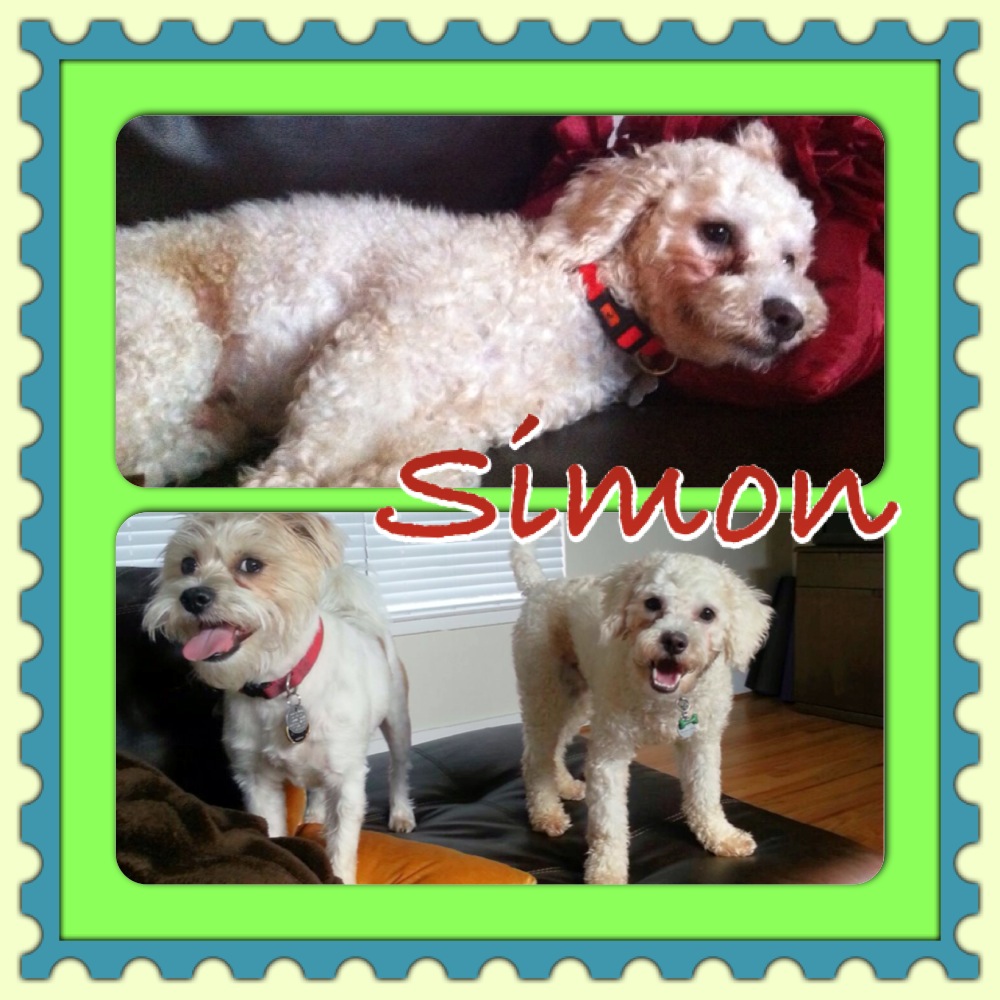