A wiener dog that gained national attention for his pudgy frame — and again later for his incredible weight loss — finally has a family.

The husky dachshund arrived at his foster family’s home with the name ‘Fat Vincent’ but after he shed 38 pounds, he earned a new nickname: ‘Skinny Vinny.’

Now it appears that Skinny Vinny’s foster family has decided to keep him around permanently.  The dachshund recently was adopted by them.

All-over-it dog lovers know the basics of keeping dogs safe in summer: Bring lots of water with you on walks, watch for the signs of your dog overheating and never, ever, ever leave a dog in the car — even on days that don’t seem that warm.

But it might come as a surprise to even the most type-A pup owners that the very pavement beneath your dog’s paws could be sizzling hot.  And hot pavement can have gruesome and painful consequences.

“Asphalt gets very hot and can burn your pet’s paws, so walk your dog on the grass if possible,” the Humane Society of the United States (HSUS) urged. But sometimes it can be hard to tell.

Luckily, there’s a quick and easy test to see if the street temperature is safe enough for a walk with your dog.  Put the back of your hand on the pavement, and if you can’t keep it there for five seconds, it’s too hot for your pup’s feet. 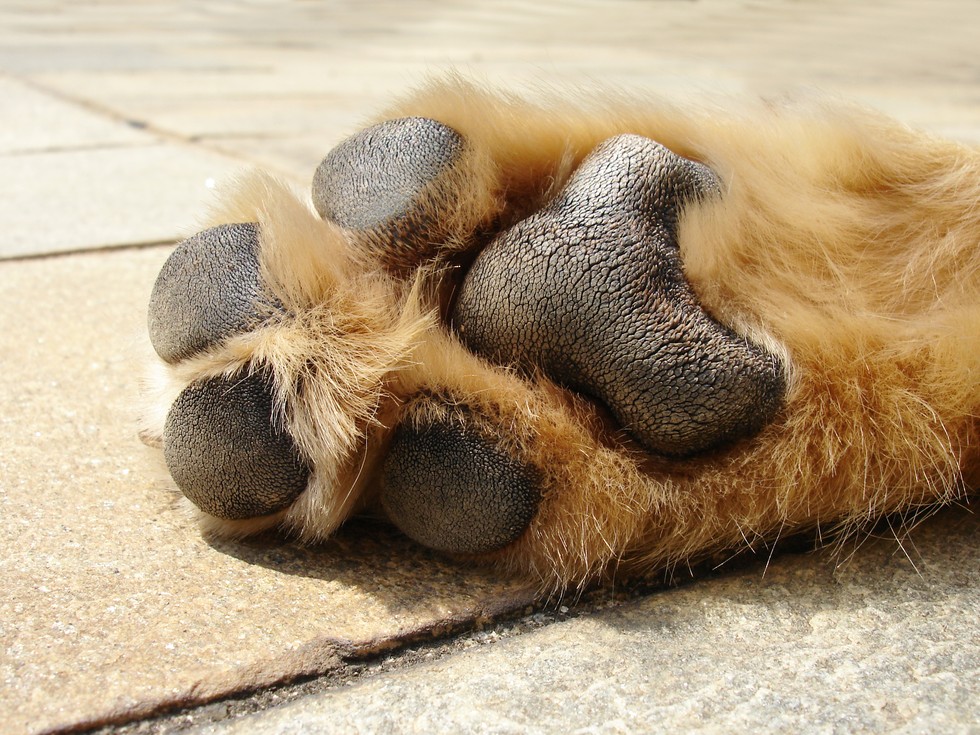 If the pavement fails the test, walk your dog when the temperature drops a bit (if he can wait) or stay on the grass.  If walking your dog on hot pavement is unavoidable, there are things you can do to be prepared, like using special dog booties or dog paw wax designed to protect your dog’s sensitive paw pads from the heat. 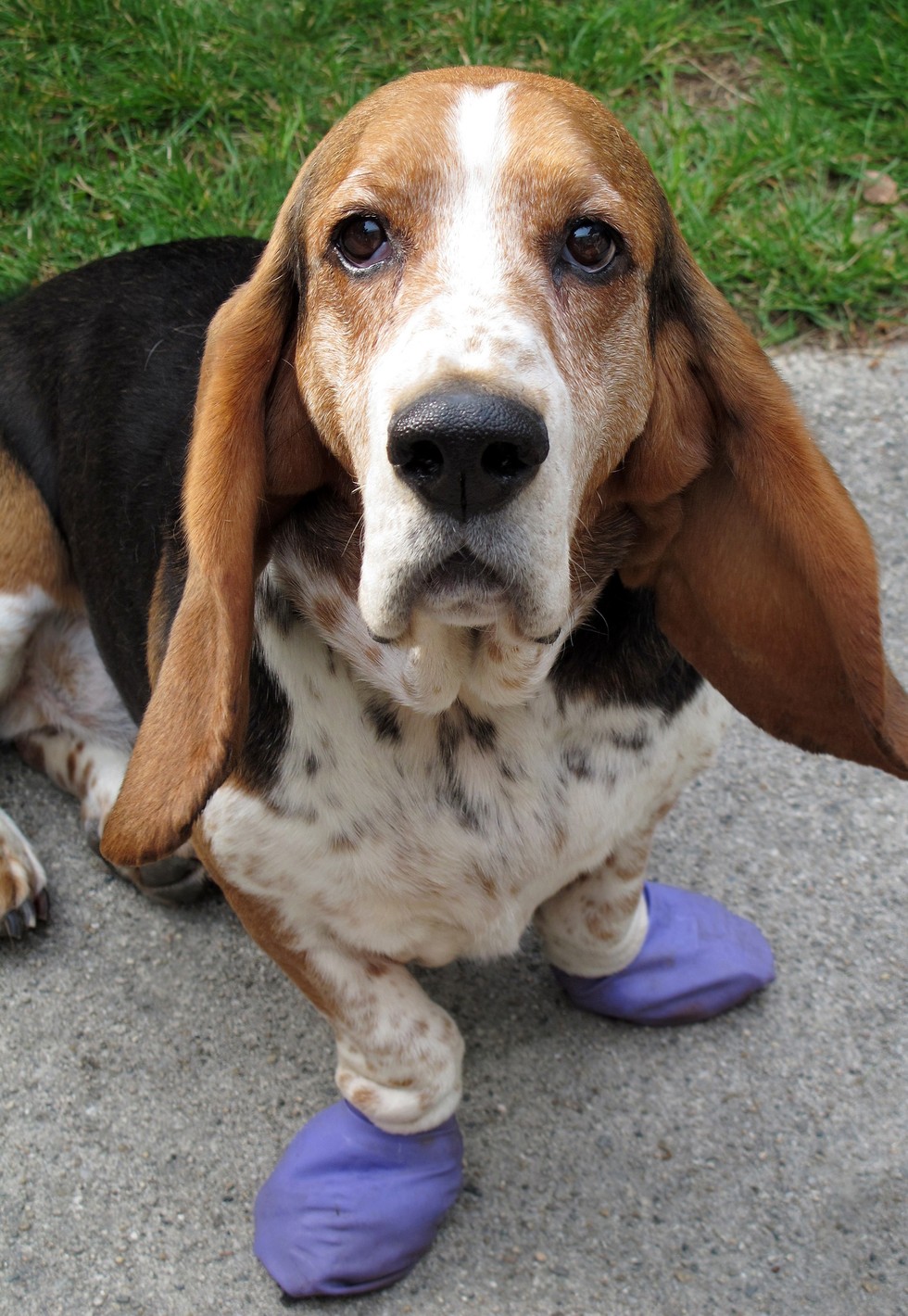 Want to know more about how to keep dogs safe this summer?  Learn how to tell if your dog is overheating.

Skinny Vinnie: The Overweight Dachshund Who Lost Half His Size And Gained A Forever Home

After nearly a year of diet and exercise, Fat Vincent has transformed into Skinny Vinnie!

The 9-year-old Dachshund from K-9 Angels Rescue of Houston began his weight loss journey at 38 pounds last August, making him morbidly obese for a dog of his size.  Now the pup is walking with a cheerier swagger, weighing in at a healthy 15 pounds.

His foster owner Melissa Anderson, who recently decided to adopt him, tells PEOPLE he is a much happier dog now.

“He’s a very good example of strength and endurance,” Anderson, 54, says.  “All of the things that have happened to him — it kind of helps put your life in perspective.  We all marvel at his accomplishments because we’ve been here with the whole time and not for one day has he been reluctant or expressed any kind animosity about all of the things he’s had to do like limit his food and follow the rules of this house.”

Vinnie was rescued by Anderson and her family last August and she suspects one of the reasons he weighed so much was from eating non-dog food with his previous family.

“I typically go through the Starbucks drive-thru in the mornings and the first time I went through with him in the car, he absolutely freaked out,” Anderson previously told PEOPLE in December.  “He jumped up into the passenger seat and then he came over to the window.  I think he was probably getting a lot of fast food — when the owner went through he also got something.”

After agreeing to foster Vinnie, he was put on a healthier diet combined with swimming up to four to five times a week and walking for about an hour a day to not only lose weight, but also lower his cholesterol level.

Now Vinnie is much more mobile.

“I’ve got like four steps down to my yard and getting up and down those steps he couldn’t do,” Anderson says.  “So, I had to carry him down the steps and up the steps, but now he just zips right up them.  It’s really made a huge difference in his energy level.”

Vinnie has also experienced great change in his emotional being.  In December Anderson said the initial signs had pointed to depression.

“First of all, he didn’t eat for two days.  This is a huge dog that obviously has a tremendous appetite.  Then he goes under the covers and just pretty much stays there,” she explained.  “He still has a little bit of an occasional sadness to him.  He’s very happy when he’s out on walks, in the swimming pool, he loves to cuddle, but he gets his feelings hurt easily and he goes under the covers.”

Anderson says he would spend most of his day on his side barely lifting his head up.

“It was just really sad.”

But by mid-October, after a few months of exercise and a better diet, his spirits were lifted.

Anderson (who has three other Dachshunds) says her initial plan was to find him a forever home with another family, but she fell in love with him too much to give him away.

“I can’t imagine letting him go.  He’s always looking to see where I am and when I leave and come home, he’s the happiest dog in the house that I’m home,” she says.  “It’s just that feeling I have that he’s worried [about] when am I going to leave and never come back again.  I can’t do it.”

Anderson, who strongly advocates for dogs like Vinnie to be rescued from shelters, says he has also added a lot of happiness to the lives of her husband Mike, 62, and daughter Emily, 17.

“We just want him to know what a forever home is like,” Anderson says.  “I thought I could find him the best home ever with all the publicity he’s gotten — he’d probably be flying on private jets, you know.  But, I just feel like I don’t want him to go through it again.  I just really feel like he needs to stay right where he is.”

To learn more about Skinny Vinnie’s weight loss journey, pick up the current issue of PEOPLE Magazine — on newsstands now!

OLD DOGS, NEW TRICKS:  A pet doesn’t have to come from a breeder to be properly trained. Conditioning a dog out of a shelter and into a home is part of its domestication.
What inspired you to work with rescue dogs?
Brandon McMillan:  I trained animals for film and television for 15 years. During that time I worked at a company that had very old-school thinking, where you always go to breeders for dogs — not rescues.  We had just lost our Rottweiler and were in the market for another one.  I convinced the owner of the company to let me go to the shelter and rescue a Rottie instead of going to a breeder.  There was a lot of pushback with that thinking but eventually, after about 20 arguments, he let me do it on one contingency: My job would be on the line if I were wrong.The next day I went down to the shelter and found a 1-year-old Rottie named Raven.  After a few months of training she was sent out on her first job and she knocked it out of the park.  In fact, she became one of our best working dogs.  Proving it wasn’t a fluke, I rescued a dozen or so more over the next few years till eventually our entire pack was rescues — and they were some of the best working dogs in the industry.  It’s safe to say I got to keep my job after that.

A NEW SHELTER: McMillan attests that when a dog has been saved from a shelter, they know they’ve been rescued and he’s happy to be a part of the healing process.

What is the biggest benefit to rescuing a shelter dog?

I can attest from rescuing hundreds of dogs over the years that they know when they’ve been saved.  When a dog is suddenly thrown into a small concrete block cell with jail bars as a front door, it affects them big-time.  The longer they spend in that cell, the more it affects them, eventually altering their personality.  When you rescue them from a situation like this now you’re starting the healing process of what they just went through.  Time will heal them, and it all starts with a new home.  It’s a win-win for both.

What is the most challenging part of training dogs?

No two are alike.  Dogs are like a thumbprint, so the method that might work on this dog doesn’t necessarily work on the next dog.  It’s almost like solving a riddle every time.  I usually have a game plan when I work with a dog, but that game plan is only good if the dog goes along with the entire plan.  Most likely, there will be some pushback on their end and I’ll need to instantly change the game plan without pausing for even a second.  I need to have a plan B, C and D already lined up, knowing that there’s a good chance this animal won’t learn off plan A.  That’s what I love about it: the challenge.  I like that it’s often not easy, because if it were easy, everyone would do it.

“My job is to teach an animal everything it needs to possibly know living in the domestic world.”

You’ve worked with many wild animals in the past. What has been your favorite?

I like working with them all because they all require different methods.  Big cats are very fast so I have to make quick decisions when training them. Primates think a lot like us so it’s a chess game when I work with them.  Bears, believe it or not, are just like working a dog.  They’re very intelligent and very trainable and they love to learn new things.

But if I have to pick a favorite I’m going to have to go with the great whites.  Not that I can train them or anything, but I’ve dived with them for years and find them to be one of the most fascinating creatures this planet has ever produced.  I host a Shark Week show on Discovery every year about great whites, which has allowed me to not only work face to face with them but also study their behavior.  What I’ve come to realize is they’re not as scary as people think.  I feel the most at peace when I’m face to face with an 18-foot great white.

APPROPRIATE EMBRACE: Adopting and rescuing a dog is a great thing to do, but McMillan advises that the pup you choose suits both your lifestyle and theirs.

What is your favorite aspect of being a trainer?

My job is to teach an animal everything it needs to possibly know living in the domestic world.  We as humans set rules for our dogs and the dogs are taught to follow our rules and guidelines.  I took a lot of different forms of martial arts for a lot of years.  What I noticed with every instructor I was a student under was their passion was teaching us everything they knew — from the details of the technique to the muscle memory, locking it into our bodies forever so we’d never forget it.  That’s the same rule I live by as an animal trainer.  I’m a technician that educates animals.  It’s a rare craft and I absolutely love doing it.

What advice would you give our readers who are thinking of adopting a dog?

I always tell people to take your time, don’t make any impulse decisions you might regret a week later because you didn’t think all of this through.  That’s the number one reason dogs are returned to the shelters — because people adopted them on an impulse decision, not thinking everything through.