Some states step up to prevent dog deaths in hot cars 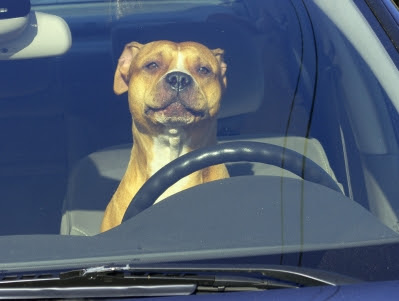 It’s dangerous to leave a dog in an unattended car.
On an 80-degree day, it takes just 10 minutes for the interior of a car
to heat up to 99 degrees.

Hundreds of dogs each year perish from searing heat in unattended cars, left there by individuals who don’t understand what a risk to the animal’s life it is.  With the car windows rolled up, even on a comfortable day, temperatures can spike in a flash and a life-threatening situation can develop.  On an 80-degree day, it takes just 10 minutes for the car to heat up to 99 degrees.  It doesn’t help much to roll down the windows, and animals don’t have sweat glands to release some of that heat.

Compelled to act by substantial numbers of animal fatalities, more than 20 states and many municipalities have made it a crime to leave an animal in a hot car as part of their anti-cruelty laws.   Now, a growing number of states are fortifying their laws by allowing good Samaritans to enter vehicles to remove animals under certain circumstances.

In 2015, Tennessee made history by passing the first such law of its kind in the nation, and since then the states of Florida and Wisconsin have come on board.  A similar bill has just landed on the Ohio governor’s desk, Michigan is considering a bill allowing the rescue of dogs from hot cars, and there is a bill in California that is moving ahead with strong bipartisan support.  Virginia just passed a new law in 2016 giving civil immunity to first responders. 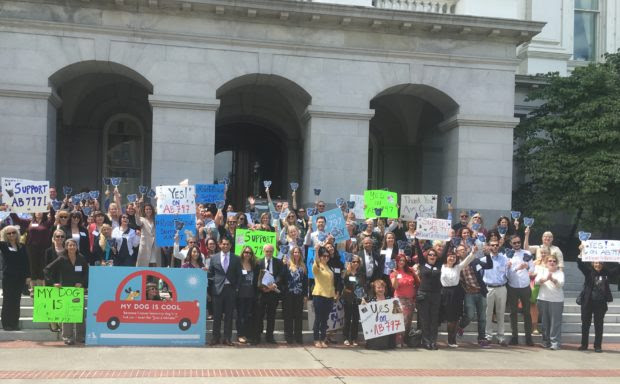 On Humane Lobby Day in California, supporters rally for HB 797, a bill that would allow good Samaritans to enter a car to save an animal from extreme heat.

Many states have good Samaritan bills addressing the dangerous problem of children left in hot cars, and we’re now catching up to make sure that pets don’t face that same threat.  Intervention is carefully defined and kept as a last resort, only to be used when all other options have been exhausted and the animal is in visible distress.  The bills also spell out what is to be done after an animal has been removed to ensure that emergency care is provided and that pets are returned to their owners appropriately.

Most people are aware of the problem, but often don’t realize that it only takes a few minutes for temperatures to mount and a dangerous situation to develop.  Putting animals at risk of an agonizing and unnecessary death in a hot car is a problem we can all agree to prevent.

Pledge to never leave your dog in a hot car »

Would You Break Into Someone’s Car to Save a Dog?

Every year thousands of dogs fall victim to extreme temperatures when left in a car by their owners, and many of these poor dogs die of heatstroke. Despite numerous animal welfare campaigns, irresponsible owners still lock their dogs in hot cars, endangering their lives.

If you saw a dog in a hot car, would you break the window to save its life?

Research has shown that in just 10 minutes, the inside temperature of a car can soar to 160 degrees or more on a 90 degree day, and up to 140 degrees even on a milder 72 degree day, temperatures that no animal should have to endure.  Dogs are not well equipped to cope with this type of extreme heat, and can die in less than 15 minutes.

What Does the Law Say About Dogs Trapped in Hot Cars?

Across the U.S., there are numerous different laws and bylaws concerning the issue of leaving animals in vehicles, with some states providing legal protection for the animals and others not.

On July 1, 2015 Tennessee announced a new law which allows people to break into a car in order to save the life of an animal.  The law is an amendment of the pre-existing ‘Good Samaritan’ legislation which now states that a person “shall be immune from civil liability for any damage resulting from the forcible entry of a motor vehicle for the purpose of removing a minor or an animal from the vehicle.”  This is great news for the pets of Tennessee, but what about elsewhere in the country?

According to Michigan State University research, only 16 states actually provide any specific legal protection for animals being confined in vehicles, with none of the others making any reference to these conditions.  That means that in the vast majority of the U.S., pet owners are not legally prevented from leaving their pets locked up in a car on a hot day.

As always though, there are other laws which can provide protection for pets, but these are much less clearly defined, making them less effective in alerting people to the dangers, or preventing them from endangering their pets’ lives.  The majority of animal cruelty laws would consider that if an animal was purposefully trapped inside a car in extreme life threatening conditions, that this would necessitate animal cruelty.  Cases such as Lopez v. The State of Texas are examples of when wider animal cruelty charges have been used to prosecute people for leaving a dog in a hot car.

Should We Have to Break the Law to Save a Life?

Despite the fact that there are 16 states which specifically protect dogs from being confined to vehicles in extreme conditions, and that the majority of animal cruelty laws, by default, would protect against this kind of treatment, the Tennessee law appears to be the first of its kind to actually protect a passerby from being prosecuted for stepping in to save an animal from this death trap.

Surely as caring, considerate and compassionate citizens, we shouldn’t have to break the law in order to save the life of a dying animal trapped inside someone’s vehicle?  There is a lot of advice out there from animal rights groups on what to do if you see a dog trapped inside a hot car, but much of it seems totally unrealistic if the timescale for the dog’s life is limited to just a few minutes.

To keep the advice in accordance with the law, they suggest things like looking around the area for the car owner, notifying the store if the car is in their car park, then notifying the authorities if that doesn’t work, but by the time a resolution is found or the authorities show up, it might be too late for the poor animal trapped inside the vehicle.

It’s time that all laws were brought into line with Tennessee’s ‘Good Samaritan’ law so that passersby have the legal backing to step in and save a life without fear of being prosecuted for criminal damage.

Source: Would You Break Into Someone’s Car to Save a Dog?